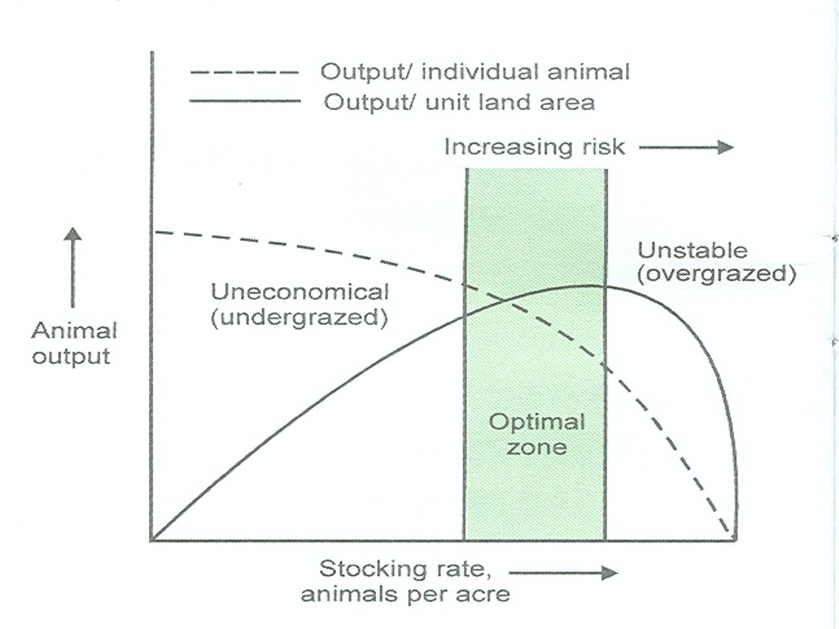 The late G.O. Mott, who specialized in grazing research at the University of Florida, designed a simple but interesting figure to explain the relationship between stocking rate and animal output. That figure, provided above, cannot provide the specific level of animal performance at any particular stocking rate on any particular type of pasture, but the shapes of the curves theoretically apply to any situation.

To illustrate, assume a productive ten-acre pasture is being grazed by only one cow. In this situation, the cow will have lots of opportunity to selectively graze, and performance for that animal will be about as good as one could expect from this particular pasture at that particular time.

If a second cow is put on the pasture, it really won’t make much difference in individual animal performance because both cows will still have plenty of opportunities to selectively graze. However, the ability to selectively graze decreases more and more with each cow added until eventually there is little or no option to select, and the cows must eat whatever they can find.

Another factor also eventually enters the picture. As the cows are required to consume forage of lower and lower quality, their intake declines. Initially, this is because the rate of passage through the body slows down as forage quality declines. Later, intake will eventually decline even more rapidly simply because there will no longer be enough forage present to allow animals to eat as much as they would like.

The area between the two verticle lines depicts what Dr. Mott termed the “Optimal Zone.” The area to the left of the optimal zone is when the stocking rate is low enough that there is tremendous forage waste (the pasture is undergrazed). The area to the right of the optimal zone depicts the situation when the pasture is stocked too heavily (overgrazed). Although a high percentage of the forage produced is utilized in an overgrazed pasture, there is great danger of a pasture forage shortage crisis from drought or other growth-limiting factors.

While staying within the optimal zone is obviously desirable, this may be difficult to accomplish. The amount of growth a pasture makes changes during the growing season. In addition, animals eat more as they grow.

If pastures are continuously stocked, and especially if the level of grazing management is rather low, the tendency is for pastures to be understocked (and thus undergrazed) during portions of the grazing season. This is because managers typically take the common sense approach of stocking at a level that should be appropriate during times when pastures are likely to be short.

If a producer employs rotational stocking, forage waste will be reduced, and overall forage utilization will be better. The tendency in this situation is to use a higher stocking rate in order to utilize the extra forage available. However, if the stocking rate is increased too much, the result can be an overgrazed pasture during periods of limited pasture growth.

Due to the dynamics of climatic conditions, plant growth, and animal behavior, getting a high level of production from animals on pasture requires knowledge, skills, and maybe sometimes even some luck. Regardless, the figure Dr. Mott developed does about as good a job of illustrating the profound effects stocking rate has on animal performance as any effort made to date.

Foraging Ahead is a column presented by Ragan & Massey and written by Dr. Don Ball, Professor Emeritus at Auburn University. Dr. Ball is one of the authors of the popular book “Southern Forages,” which can be found via a computer search that uses the words, “Southern Forages, The Fertilizer Institute