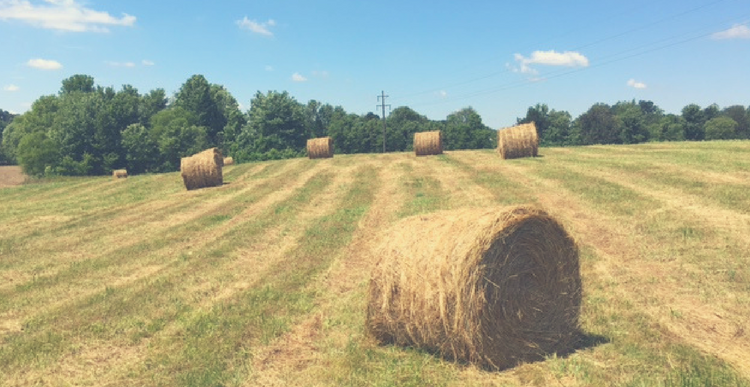 Spontaneous combustion can occur if hay is baled at too high a moisture level.  Hay in round bales should contain no more than 18% moisture when placed inside a barn, while hay in small rectangular bales should contain no more than 20% moisture.  The exception to this is when a hay preservative such as proprionic acid is applied to the hay prior to bailing. When this is done properly, hay may be safely baled at 25 percent moisture or higher.

Heating of hay is caused by microorganisms.  Dry hay does not heat excessively because it lacks the necessary moisture to support microbial growth.  The microorganisms that cause heating are present on all forage and will become active if conditions are suitable.

Monitoring of hay after baling to determine the extent of heating is a good idea. Hay temperature can be checked with a probe.  A hay probe can be made from a 10-foot piece of 2-inch diameter pipe that has one end sealed with a sharpened plug.  The pipe can then be driven into a stack or large bale of hay followed by lowering of a thermometer into the pipe.  Multiple readings should be taken at various locations to determine the temperatures throughout the hay.

When hay temperature remains below 120 degrees Fahrenheit, it is considered normal and safe.  The range of 120 and 140 degrees is a danger zone, and the hay should be closely monitored.  Even if the hay does not catch fire, heating to these levels reduces nutritional value. If the temperature rises to 160 degrees or higher, a fire is likely.

If large bales that will ultimately be stored inside are heating excessively, delaying putting them in the barn for a few weeks may save the barn.  Spacing the bales widely during this time to favor escape of heat can also be helpful.  Green hay should never be placed directly against dry hay.

Decisions pertaining to storage can have a big influence on the likelihood of accidental fires.  Bale stackyards should not be located in places where a fire is likely to occur.  For example, they should not be adjacent to a wire fence or under a tree that might attract lightning.  Similarly, they should not be in a field where a wildfire could occur.

It is best to have several bale stackyards rather than just one, as this reduces the risk of a wildfire destroying all hay on the farm.  The same principle applies to barn storage if one has the option of storing hay in more than one place.

If hay is stored in a barn, it is best to eliminate vegetation and combustible trash around the edge of the barn that could cause the structure to catch fire in the event of a wildfire.  Posting “No Smoking” signs around a barn is desirable, and fireworks should never be used in the vicinity of a hay barn or stackyard.

Hay burns readily, and hay fires are costly.  Hay production is stressful enough under the best of circumstances, but it is particularly tragic to see one’s hay crop literally go up in smoke.  A little knowledge, common sense, and simple precautions can go a long way toward reducing the likelihood of a hay fire.