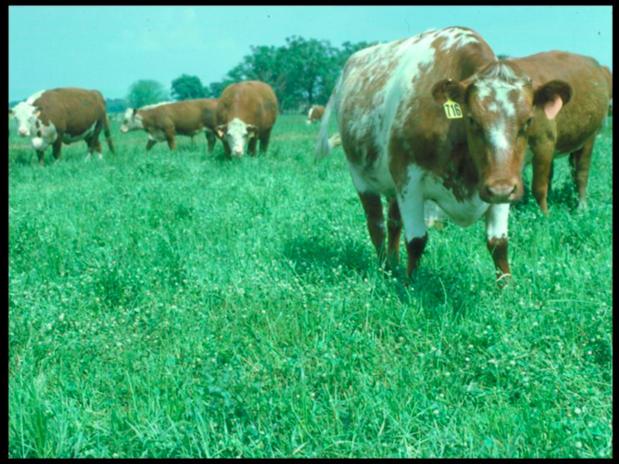 As we learn more about a subject, we usually begin to realize that even highly knowledgeable people don’t always agree about everything pertaining to it.  People are dealing with the same facts and principles sometimes have differing philosophies or want to take different approaches.

In forage production, an area of differing philosophy is what might be called, “the grass-versus-legume controversy.”  Many forage crop experts seem to either lean heavily toward the predominant use of forage grasses, or they strongly favor the use of legumes whenever possible.  Obviously, decisions regarding the forage species to be used greatly affect livestock production and profit.  Therefore, this controversy is worthy of a closer look.

Forage grasses offer a number of important advantages.  In general, they are easier to establish than legumes, they tend to be more dependable, and (when comparing perennial grasses and legumes) usually are more persistent.  Except for rare occurrences with a succulent annual such as annual ryegrass, livestock bloat is not a problem with grasses.

Grasses respond to liming and fertilization, but many are fairly tolerant of soil acidity and/or low levels of various nutrients.  The forage yields of many grasses are high, especially if regular applications of nitrogen are made, which is relatively easy for producers to do.  Most grasses require less overall management than legumes, and leaf shatter is not a concern when grasses are cut for hay.

Proponents of legumes point to their generally superior forage quality which can result in significantly higher average daily gains and often better livestock reproduction.  Legumes also tend to improve the soil.  Over time, the shattering of legume leaves may increase soil tilth and/or organic matter.  In addition, the tap-root-type root system of some legumes penetrates the soil deeply and leaves root channels that aid growth of subsequent plants.

Legumes also have the unique ability to fix nitrogen in association with Rhizobium bacteria.  Although levels of other nutrients are generally more critical for legumes than for grasses, nitrogen is the nutrient required in the large amounts for forage production, and is also typically the most expensive.  While nitrogen fertilizer is a major cost input in grass forage production.  Legumes provide their own supply, some of which becomes available to plants growing with or after them.  The combination of excellent animal performance and low cost forage production thus makes a strong case for the economics of using legumes.

In most controversies, the truth (or the optimum situation) lies somewhere between the most extreme positions.  Because of their persistence and dependability, it makes sense that most forage programs for cow/calf operations should be built around perennial grasses.  This, of course, is exactly the situation we have.

However, legumes have an important place.  Legumes have their disadvantages, including a higher management requirement. However, their attributes, especially nitrogen fixation and higher animal performance, are of major importance.  By turning management up a notch to include legumes in a forage program, the profitability of a livestock operation can often be substantially increased.

There is actually no “right” or “wrong” approach.  As an analogy, one football coach may decide to use a particular offensive formation while a rival uses another.  Furthermore, depending on the skills of his players and other factors, a given coach may use different approaches at different times.

The ideal forage program in many areas is one that uses both grasses and legumes.  A producer may use grasses in most areas, but have some acreage planted to legumes as well.  Furthermore, a particularly good approach in many cases is to seed legumes into existing grass fields.  This allows a livestock producer to realize advantages from both forage grasses and forage legumes.

Foraging Ahead is a column presented by Reagan & Massey and written by Dr. Don Ball, Professor Emeritus at Auburn University. Dr. Ball is one of the authors of the popular book Southern Forages, available here.