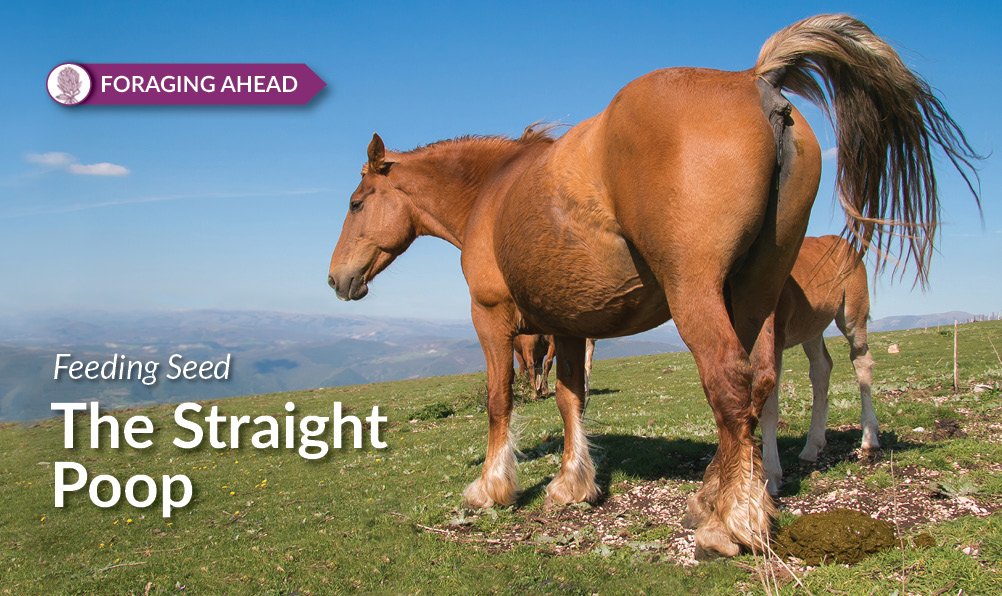 Most cattlemen know that livestock can spread seeds by eating them, then depositing them in feces wherever they wander. This can be a problem! Cattle often place unwanted bahiagrass in Bermudagrass hayfields, introduce toxic endophyte-infected fescue into nontoxic fescue, and spread seed of many types of weeds into pastures of various types. However, livestock sometimes move seed of desirable plants such as clovers.

This raises a question: Might it be feasible to feed seed to cattle (perhaps mixed with a ground feed material) for the purpose of introducing certain forage species into a pasture on a farm? A number of scientists, including Dr. W.R. Ocumpaugh, a former professor with Texas A&M University, have studied distribution of seed by livestock at length and made some interesting findings.

Cattle begin excreting seed within 10 to 12 hours after ingestion. Most seed will be excreted within 72 hours, but in some cases seed may be excreted 5 to 7 days later. A single cow will defecate 10 to 12 times daily, so the potential for a group of cattle to distribute seed in numerous places over a pasture is high.

With legumes, essentially all seeds that are not “hard seed” will be digested, and thus they become nothing more than expensive diet supplementation. Unfortunately, with most legumes, the percent of hard seed is no more than around 15 to 20 percent.

Also, legumes require infection with Rhizobium bacteria to ensure that they effectively fix nitrogen. These bacteria cannot survive in the digestive system of animals, so “fecal seeding” amounts to planting raw seed. Thus, if the bacteria required for nodulation are not already present in the soil, nodulation will not occur.

When considering the possibility of fecal seeding (or, for that matter, any seeding technique), it is important to remember that in order for a plant to become established and productive, it must be able to compete in the setting in which it has been placed. For example, a thick, vigorous stand of tall grass is not a likely site for successful establishment, regardless of how well the introduced species is adapted.

Unfortunately, much fecal material is deposited under trees, near a water source, or along the edges of pastures. Even with daily rotation of animals from pasture to pasture, the distribution of fecal material and any seed it contains will be far from even.

Traditional methods are the way to go

Thus, in most situations, feeding seed in an attempt to increase the proportion of desirable plants in pastures is highly inefficient at best. Spreading or planting seed by a livestock producer offers these advantages: (1) the germination level of the seed is known, (2) the seeding rate is controlled, (3) seeds are distributed evenly, (4) most seed is placed in a spot that makes germination and establishment likely, and (5) legume seed can be properly inoculated.

The survival rate of seed after passing through the bodies of animals is often high enough to cause a problem if you don’t want them to survive, but really not good enough or dependable enough to use as an economical seeding technique in most cases. The spread of seed of desirable forage plants by livestock can be a bonus but usually is not a logical objective.

Foraging Ahead is a biweekly column presented by Ragan & Massey and written by Dr. Don Ball, professor emeritus at Auburn University. Dr. Ball is one of the authors of the popular book, “Southern Forages,” available here.