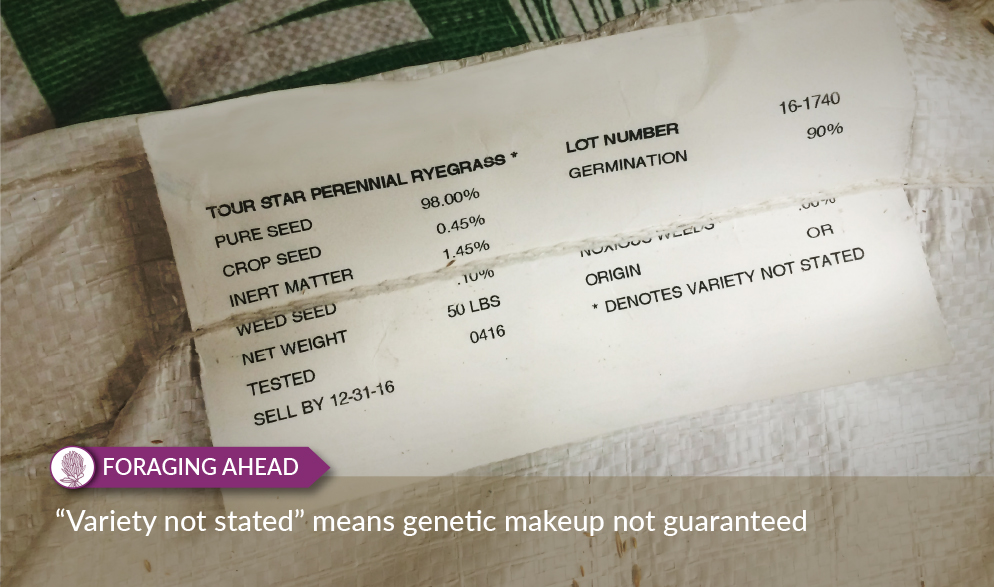 “VNS” (variety not stated) is an acronym used frequently in the seed industry. It simply means that for a particular lot or bag of seed, no variety is specified. In other words, although the species is stated, and although other characteristics of the seed such as germination or the percent of weed seed and inert material present may be provided, there is no guarantee being made regarding the specific genetic constitution of the seed.

Why would seed not have a variety specified? There are several possible reasons. It may be that the seed was harvested from a field in which the variety was unknown; maybe the identity of the seed was somehow lost in the process of cleaning and processing; or it could be that for some reason the marketer simply thought that the seed might sell better without its rightful variety name attached to it.

There are some situations in which VNS may not be used even though no variety is stated. For example, it is not applied to Johnsongrass seed because there are no Johnsongrass varieties. On the other hand, there are numerous varieties of seed-propagated Bermudagrass, some developed for forage and some for turf. If a marketer has seed of such a variety and decides to not use the variety name, it could be labeled VNS turf Bermudagrass, VNS forage Bermudagrass, or simply common Bermudagrass.

High-quality “variety not stated” seed is the exception, not the rule

It is not unusual for producers who have purchased VNS seed to be pleased with the results of their decision. After all, such seed is almost always less expensive than seed sold under a variety name, and sometimes plantings made with VNS seed achieve results as good as those obtained from named varieties.

Seed sold commercially can be placed into one of three categories. First, there is seed that does not have a variety designation on the label. This may be because there are no varieties of the crop, but if it is labeled VNS there is simply no information provided regarding genetic constitution. Second, there is uncertified seed that has a label designating it to be a particular variety. Such seed has the reputation of the seed marketer behind the claims regarding its genetic constitution. Third, there is certified seed that has met the rigorous standards of a seed certifying agency, not only with regard to genetic constitution but also with regard to purity, germination and other measures of seed quality.

There is an old country saying that warns about the danger of “buying a pig in a poke.”  What it means is that it isn’t a good idea to buy a pig in a sack without looking at the pig. In fact, it isn’t a good idea to buy anything without either being able to closely inspect it or without receiving some sort of assurance from a credible source about what one is getting for the money spent.

With “variety not stated” seed, there is no assurance, and certainly no guarantee, with regard to seed genetics. With a few species such as Johnsongrass, that can’t be helped.  However, for forage species that have received the focus of plant breeders over a period of years, and for which there are improved varieties commercially available, buying VNS seed is not a good idea. Farming is risky enough without using seed of unknown genetic constitution.