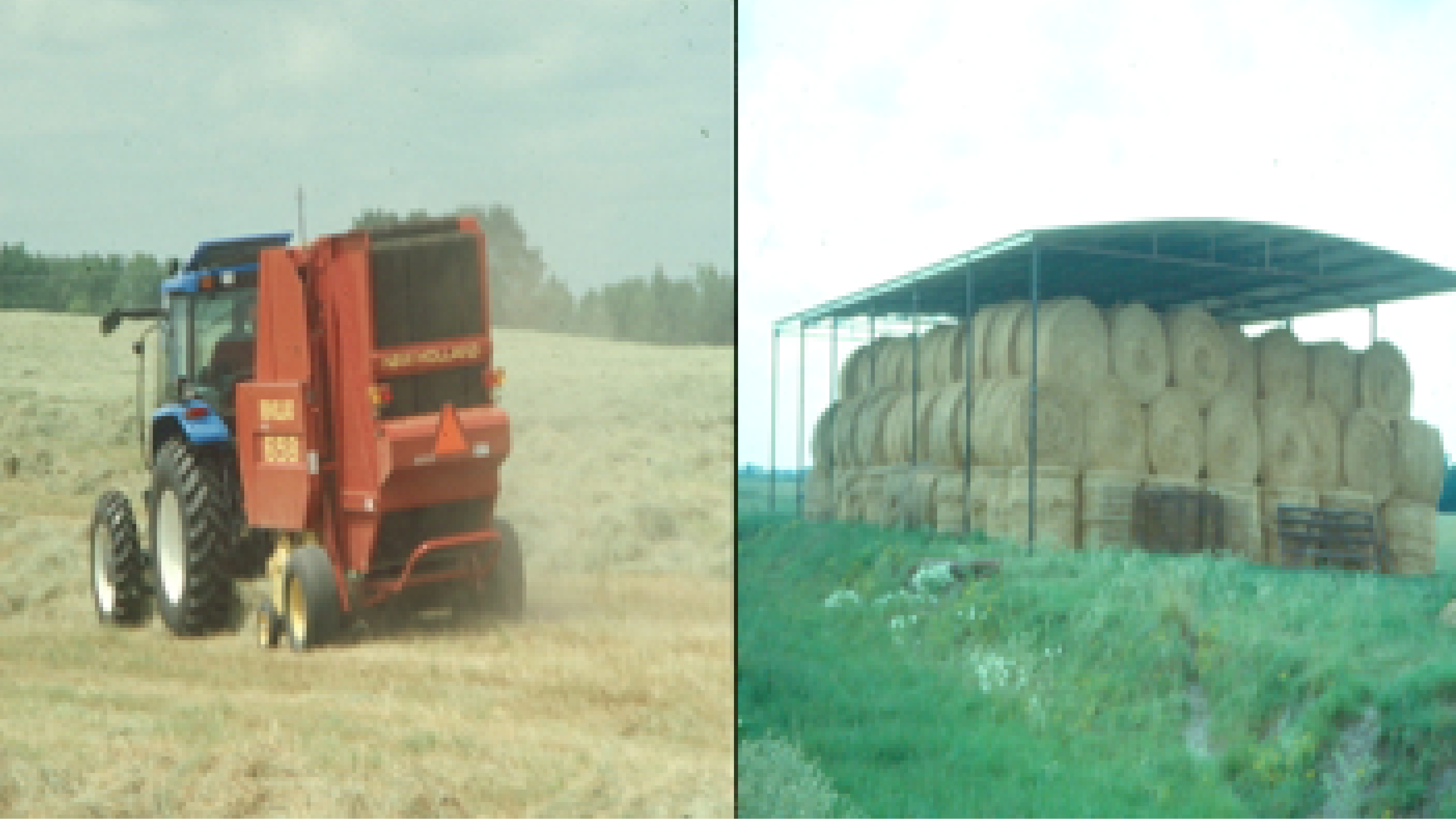 A key to profitable livestock production is to minimize the need for hay or other stored feed. Use of various techniques to extend the availability of pasture forage and thus keep animals grazing as long as possible is highly desirable on most farms. However, most producers will need to provide hay or some other stored feed at certain times during the year.

Minimizing hay losses is an important strategy for reducing hay needs.  The more hay wasted, the more that must be produced or purchased to feed animals when there is insufficient pasture forage available. Hay is usually considerably more expensive than pasture forage.

Losses likely to occur during the curing, harvesting, storing, and feeding of hay under lax or good management are provided in the accompanying table.  Given the worst-case scenario, animals may end up consuming only about 29% of the forage present in a hayfield at harvest.  However, through the application of research findings and available technology, losses can be significantly reduced on most farms.

The value of hay storage and feeding losses in the USA are estimated to exceed $3 billion annually.  On some farms, hay storage and feeding losses account for over 10% of the cost of livestock production.  These are potential losses. They are real losses that occur after all the time, energy, and effort required to produce and harvest the hay have been incurred.  Fortunately, these losses can usually be greatly reduced or eliminated without a great deal of expense or effort.

Numerous steps can be taken to reduce hay losses, with the following being a few examples. Curing: Hastening curing via mechanical conditioning, and raking before hay gets too dry. Harvesting: Formation of windrows that facilitate quick-drying, and adjusting balers to minimize leaf shatter. Storage: Avoiding hay/soil contact, and rain penetration of hay: Feeding: Avoiding giving animals access to large amounts of hay at one time, and using bale protectors.

If  a person had to select a single word to describe the impact of hay losses on profitability in most livestock operations, a good one to choose would be “insidious,”  which means “stealthily treacherous or deceitful,” or “operating or proceeding inconspicuously but with grave effect.”  Hay costs many livestock producers much more than they realize. Minimizing the amount of hay needed, and minimizing losses associated with hay that is needed, can go a long way toward increasing profit.

Percent Loss Of Hay From Curing Through Feeding

*Losses of dry matter remaining at the beginning of each step

**Losses accumulate with each step

Foraging Ahead is a column presented by Ragan & Massey and written by Dr. Don Ball, Professor Emeritus at Auburn University. Dr. Ball is one of the authors of the popular book “Southern Forages,” which can be found via a computer search that uses the words, “Southern Forages, The Fertilizer Institute.”